9 Tips On How To Win This Cold & Flu Season 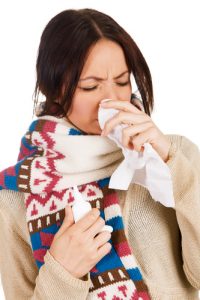 The dreaded cold and flu season is upon us and that means it’s time for you to take precautions so you don’t get stuck in bed feeling terrible. And contrary to popular belief, there’s much more that you can do besides washing your hands. Additionally, there are quality methods that you can employ if you catch a bug in order to shorten its lifespan. Learn how to win this cold and flu season like a pro with these effective tips.

Open up a window.

Even if you keep your distance, simply being in the same stuffy room with a sick person can make you susceptible to cold and flue viral particles. By opening a window, you can let some fresh air in and keep airborne material moving and hard to pick up.

Move your hand away.

Avoid touching your lips because it’s like putting yourself in direct contact with tons of germs. Think about it, your hands are everywhere. It’s a bad habit but you can break it through conscious thinking and perhaps sitting on your hands while idle.

Mushrooms have shown some recent evidence that they can boost your immune system. People who ate a cooked shitake mushroom every day of the month demonstrated higher numbers in T cell and less inflammation.

Catch up on those Z’s.

A good night’s rest is not just a luxury, but also a necessity to staying healthy. Research has found that people who sleep for less than seven hours are three times as susceptible to colds compared to people who slept at least eight hours.

If you do catch the cold/flu, then you’ll want to drink plenty of liquids. Now, you’ve probably heard this one, but does it actually do anything? It actually helps thin out the mucus that you get when you’re sick. So you should drink about two liters of liquids each day until you feel 100 percent.

Dry, indoor air will make a soar throat and bad cough even worse so using a humidifier to create moisture will definitely help you.

Sweat, but not too much.

Working out with a gentle, brisk walk or relaxed yoga class can help you boost circulation. However, when sick, it’s not time for an intense workout. Your body necessitates energy to fight off your cold/flu.

A classic cold and flu fighter, chicken noodle soup will open up a stuffy nose with its steam and the salty broth will combat a sore throat.

If you don’t want to waste any moment of time cooped up in bed and unable to fully function, then you’ll want to make these tips a part of your everyday lifestyle during this cold and flue season. Stay healthy and take care!