How To Burn More Calories At Your Desk Job 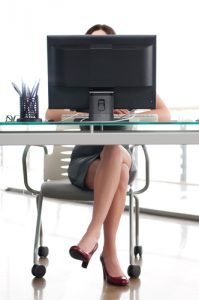 If you work at a desk job, then you probably have heard about the harmful effects of sitting. And if you haven’t, yes, sitting can cause negative effects on your liver, weight, brain, mental health, and your lifespan. Luckily, growing research on the health topic of sitting has brought to us methods to combat this office-induced phenomenon. The latest study tells us that in the situation of standing/sitting, we might want to think of a more quantity over quality concept.

It’s All In The Facts

A new study conducted by the University of Glasglow found that people typically burned more calories when they stood up more frequently (90 seconds) compared to longer blocks of time (15 minutes).

This study was conducted with 10 overweight men who went through three scenarios of sitting over the course of several weeks. They first had them sit the entire day, only getting up for bathroom breaks. Then they alternated between sitting and standing every 15 minutes. Finally, they alternated every 90 seconds between sitting and standing. In the end, the men were standing for a total of four hours but with only 32 transitions in the second scenario and 320 in the third.

While the second situation burned 10.7 percent more calories than continuously sitting, the third scenario burned 20.4 percent more! That means the men’s bodies burned an additional 71 calories and oxidized about 7.1 grams more fat. After all the calculations, the researchers concluded that over a period of four weeks, choosing between the two situations of alternating between sitting and standing could translate to a weight loss of 2.7 and 4.9 pounds, respectively.

Putting It In Perspective

Although, the sample size is small and the research is fairly new, the results are great news for those trying to combat sitting. The numbers make sense! You’re essentially adding squats to your daily office time. If you’ve heard that interval training works better than elongated workouts, then you can see how the science would apply in the same way here.

This might put some struggle into your office productivity, so if you’re trying to keep healthy alternate your position as much as realistically possible. Get your work done but don’t compromise your health either!

So Do I Not Need To Workout?

Are you wondering if you can get away with standing and sitting all day at work without your daily gym time? Not exactly. This method can never actually replace your daily fitness routine, but it certainly helps! If you have no plans to go to the gym or go on a brisk walk after work then you should definitely employ this tactic. And even if you do plan to keep your fitness up to par, alternating positions will still greatly benefit your health!

So next time you’re at the office, try setting a timer for you to follow where you’ll know to stand up or sit down. If it’s too uncomfortable consider making the investment in a standing desk!